Lisa Davis lives with Complex Regional Pain Syndrome (CRPS) and was first involved with Burning Nights CRPS Support as a volunteer. She has since joined the Board of Trustees for the charity.

My name is Lisa, I’m 31 and I’m from the Midlands. I have suffered with CRPS in my right leg, ankle and foot since July 2011 when I was bitten by an insect while on holiday in Wales that triggered an allergic reaction which subsequently became CRPS.

At that time I was in my second year of University studying to become a youth worker, I was officially diagnosed in January 2013 and using crutches to get around, I was managing to work at a youth centre as lead youth worker and successfully completed my degree in Youth Work in June 2013. 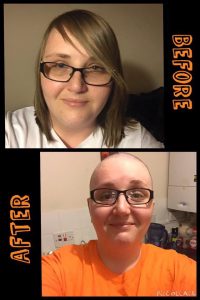 I did a two (2) week in-patient stay at Bath Hospital’s specialist CRPS unit where I made huge progress.

In November 2013 I developed my first very small ulcer. By January 2014 that ulcer had not responded to a variety of dressings or treatments and now covered my leg below the knee to ankle. The wounds were severely infected and leaking slough. I was admitted to hospital where I spent 4 months enduring many different treatments and antibiotics until finally it started to heal. I was discharged in June 2014, but by October I was admitted again to hospital because it again had worsened and become severely infected. I spent a further 5 months in hospital and saw a range of doctors from all specialities, none knowing how best to treat my leg ulcers with the CRPS. I was again discharged this time the ulcers hadn’t started to heal but the doctors had exhausted all of their ideas so sent me home. District nurses were seeing me at home and scrubbing my leg every other day to remove the slough, they decided to start using compression bandaging on my leg and thought it could be lymphoedema. The ulcers slowly healed and the dressing no longer being used because it was decided it wasn’t lymphoedema just CRPS swelling. This was October 2016; now the ulcers have again returned and are continuing to worsen.

For me, amputation was the only option left in order to stop the ulcers and infections which continuously made me incredibly sick, it’s no longer just the pain of CRPS, it’s also my tired and exhausted body fighting infection after infection. Doctors agreed amputation was my only option with each infection growing in severity. I had an above knee amputation in 2018.

Since the amputation I have thankfully had no further ulcers, however due to the surgery my CRPS has spread further up my leg and now into my hip and lower abdomen. I tried rehabilitation six months after surgery with optimism; hoping a prostethic limb could be an option for me, but sadly this wasn't possible due to the extreme sensitivity and pain in my stump.

I still have good days and bad days but without the ulcers life is significantly easier.