Complex Regional Pain Syndrome or CRPS was formerly known as Reflex Sympathetic Dystrophy or RSD. It is considered to be a multi-system syndrome or condition that is mainly characterised by pain that lasts for a long time after the normal length of time for healing.

In the United Kingdom, the main guidelines that are used and followed are the Royal College of Physicians (RCP) Guidelines for Complex Regional Pain Syndrome in adults. These RCP Guidelines for CRPS were updated in July 2018 (2nd Edition).

According to the Royal College of Physicians (RCP) Guidelines for CRPS (2018), Complex Regional Pain Syndrome (CRPS) is:

Complex Regional Pain Syndrome, formerly known as Reflex Sympathetic Dystrophy, was first described in the mid-16th Century. However it was then later more commonly known in the descriptions during the American Civil War by Silas Weir Mitchell.

Are CRPS and RSD The Same Condition?

Yes, they are the same condition.

Over the last five centuries that CRPS has been described, it has had over 200 different names in the English language alone. CRPS is the current name for this condition, but it was previously named RSD or Reflex Sympathetic Dystrophy.

RSD is now what is known as CRPS Type 1 or CRPS 1.

What Types Complex Regional Pain Syndrome (CRPS) Are There?

The terms Warm/Hot CRPS, Intermediate CRPS and Cold/Blue CRPS are not classed as Complex Regional Pain Syndrome sub-types, but more of an explanation of the stages that a person living with CRPS goes through in each type, i.e. from acute phase to chronic phase.

Find out more about the Types of Complex Regional Pain Syndrome (CRPS).

How Does CRPS Develop?

The diagram below can help to explain how Complex Regional Pain Syndrome develops and the cycle the CRPS goes in. The diagram illustrates that:

Find out more about the Signs and Symptoms of Complex Regional Pain Syndrome (CRPS). 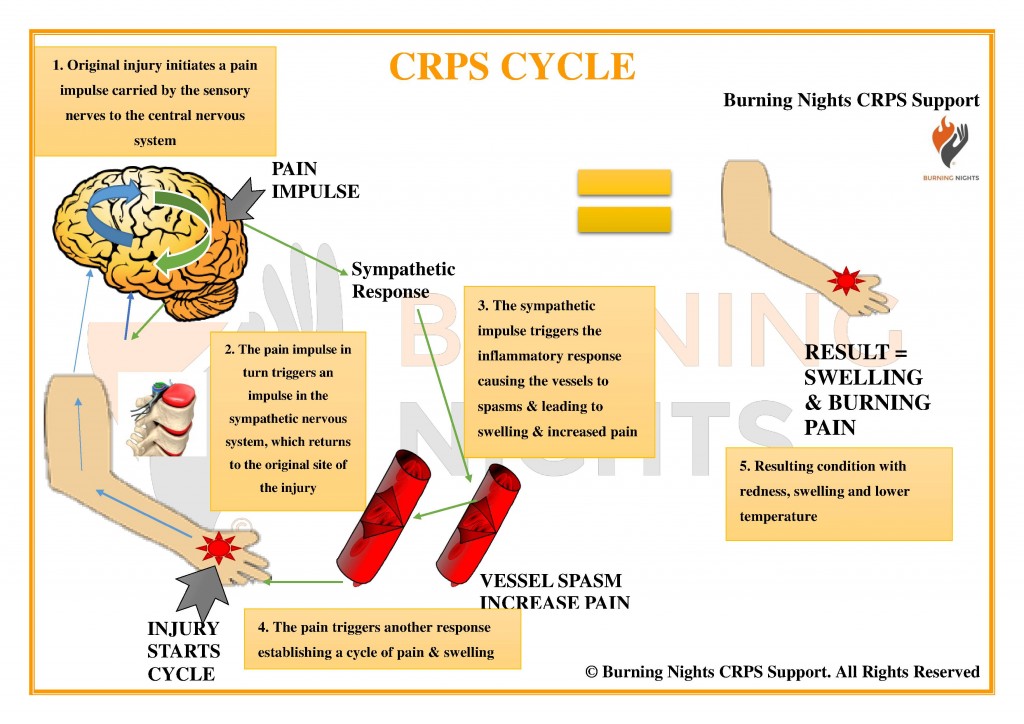 Is CRPS A Mental Illness?

Research has shown again and again that CRPS is a physical condition. It is not a mental illness, although there are unfortunately still people who believe that. Research has shown that there is no link between any psychological conditions causing the onset of CRPS. However, due to the constant high levels of pain and the issues caused within the biopsychosocial model of living with this long term condition, CRPS can go on to cause mental health issues such as PTSD, anxiety, depression, GAD and other psychological conditions.

If you are affected by mental health problems subsequent to your CRPS, please ask to be referred for counselling or the mental health team. Learn more about the various psychological treatments available for CRPS via our CRPS blog series.

Please remember that it has been proven through research that Complex Regional Pain Syndrome is a physical condition, despite what you may hear from a medical professional. Some medical professionals believe that the condition is caused by previous psychological problems, but this is NOT the case. The condition can causes future psychological problems because of the constant amount of pain. Prior psychological or mental health issues don’t predetermine CRPS. CRPS is not in your mind. It is a real physical condition.

Unlike other conditions and illnesses, there are not millions of pounds in Government funds or charitable donations from the public to help research the condition. This is one of the reasons why Burning Nights CRPS Support was originally founded and became a charity. If you’d like to support the work that Burning Nigths CRPS Support does please consider making a donation or setting up a fundraiser in aid of the charity. Or why not check out the many other ways of making a donation without giving money. accepts donations to help us to continue being a successful UK charity for CRPS. We also now accept both one off and regular donations via Text. To find out more about Text Donations please visit our Text To Donate page.

Other CRPS Information To Read

After being diagnosed with Complex Regional Pain Syndrome, it can seem extremely daunting and frightening, leaving you feeling vulnerable. We have produced a lot of evidence based information to help you learn about your condition, how the condition can be managed, as well as CRPS blogs helping you learn to live with your chronic condition.

Here is just a few CRPS articles for you to read: