Ciaran thought May 22nd 2017 would be the best night of his life. It was finally time to cash in on his Christmas present from his mum Lyndsay and his grandmother – a ticket to see his idol, American pop star Ariana Grande, perform at the Manchester Arena. Determined to make their big night extra special, Lyndsay and his grandmother had even booked a limousine to take Ciaran and his little sister to the concert of their dreams. But their excitement turned to horror when it was time to go home.

As they were making their way towards the arena’s foyer to leave, they heard a big blast. Then they saw people nursing horrific injuries. A suicide bomber had detonated an explosive device, killing 22 people. In the chaos and confusion that ensued, Ciaran – then just 13 years old – got separated from his family. He fell over and found himself being trampled on by concertgoers running for their lives. When his grandmother found him 15 minutes later, he was shaken up but suffered no bodily harm – only a few aches and pains.

In the weeks after the bombing, Ciaran started hallucinating about the bomber, imagining him on his bed or in his room talking to him. Ciaran was admitted to hospital and diagnosed with posttraumatic stress disorder (PTSD). But his nightmare didn’t end there. In December 2018, 1.5 years after the bombing, Ciaran began to suffer from extreme fatigue and no matter what he ate, he couldn’t put on any weight. Then one day at school in April 2019 he felt a sharp stabbing pain in his hip. By the evening, the agony had spread to his knee and ankle, leaving him unable to stand. When he got to hospital the following day, Ciaran’s leg was so sensitive he could no longer bear for it to be touched. He became bedridden and was diagnosed with Complex Regional Pain Syndrome (CRPS), with doctors saying this rare disease had been triggered by his PTSD. 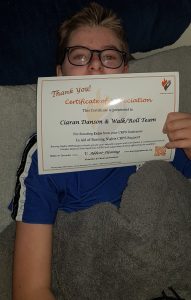 The throbbing has since spread to Ciaran’s hip. He often feels a burning sensation in his leg, as if it were on fire. Stabbing and shooting pains course through his limb, alternating with tingling feelings and pins and needles. Even a soft make-up brush touching his leg is enough to make him writhe in pain. Cuddles with his mum are out of the question. Ciaran hardly gets any sleep because of the physical torment and his mum sometimes has to call an ambulance to give him gas and air when it gets too bad. He needs 24-hour care and none of the dozens of pills he swallows every day fully take his discomfort away.

Lyndsay struggled to understand how her teenage son had gone from being a bubbly, happy boy who loved to sing and perform to a depressed and wheelchair-bound child battling excruciating pain despite not being physically injured in the bombing. She reached out to Burning Nights CRPS Support after seeing the founder, Victoria Abbott-Fleming, on television.

“After being in a black hole, Victoria and her husband have helped guide me in so many ways,” she says. “I am truly grateful for finding this support as the NHS have no real idea about this condition. I know this as I sat with 15 specialists and they still couldn’t give me the same information or the same support I have had received from Burning Nights CRPS Support.”

“I am truly grateful for finding this support as the NHS have no real idea about this condition. I know this as I sat with 15 specialists and they still couldn’t give me the same information or the same support I have had received from Burning Nights CRPS Support.”

Since then Lyndsay has used the telephone helpline that Burning Nights CRPS Support runs as well as the charity’s CRPS information leaflets and its social media support services.

“As a mother, I would highlight Burning Nights CRPS Support as anyone’s go-to charity for information on this horrible debilitating illness. The information online and over the phone really is the reality to this condition. There needs to be more awareness on CRPS,” she says. “I couldn’t have got through things without your ongoing support.”

“I couldn’t have got through things without your ongoing support.”

Ciaran, who wants to raise awareness of the condition that he is bravely battling but which so few people understand, recently raised £150 with some friends by doing a sponsored walk/wheelchair roll.

Lyndsay adds: “I support this charity as the support is invaluable within this family. And I mean every word – the help I have had has been invaluable, as has the care and support – I feel a part of a family.”