When Maggie got a job hauling oil sands around in a huge dump truck, she was delighted. She was a single mum with two young children and her new job paid well, especially when she did overtime. But driving a truck the size of a two-storey house was no mean feat – she often felt the seatbelt tighten around her waist as she drove down rough roads, the whole vehicle vibrating. One day, two years after starting the job, she felt a sharp pain shoot through her abdomen as she reached into her locker at work. She rushed to hospital, where a doctor said she was probably suffering from nerve entrapment and a tear in her abdomen, most likely due to the seatbelt. She had surgery to remove the fluid but the pain nonetheless spread down her leg and then into her arm and finally her head. 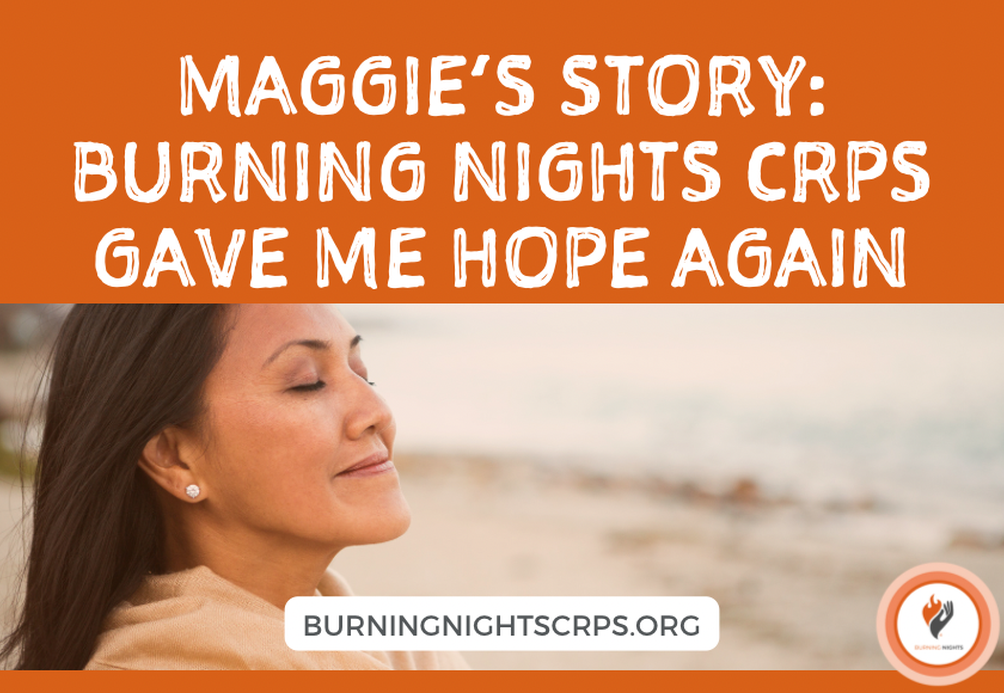 After 20 medical procedures over four years, Maggie was diagnosed with complex regional pain syndrome (CRPS). Now she can’t sit for very long, let alone drive, because her leg goes numb and she loses feeling in her foot. Her pain has deprived her of the chance to go out and play with her children or to pick them up when they want a hug. Unable to sleep for more than three hours at night because of her pain, Maggie doesn’t have much energy to look after them either. At first it felt like no one understood her condition – she didn’t know anyone else who was aware of CRPS and she had trouble convincing her employer that her struggles were real. In desperation she began doing some research and found Burning Nights on Instagram. She joined the monthly online CRPS patient support group, which she says reassures her that she is not alone in her suffering.

“Without Burning Nights CRPS  I would probably be just sitting around being sad about my situation and feeling alone.”

“You sometimes have the feeling that you’re just crazy and maybe it’s all in your head but this group makes you feel like you matter and that what’s going on with you is real and just hearing people’s stories helps make it more real and for you to not feel alone is the biggest thing,” says Maggie, a 30-year-old who lives in Canada. “I feel like I belong somewhere now whereas I kind of felt like nobody understood and I didn’t belong before.”

At the online meeting with others loving with CRPS, Maggie found out about a CRPS group in Canada. That group then put her in contact with a company that makes spinal cord stimulation devices that could alleviate her pain somewhat.

“I have hope again - I would have never known about any of this without Burning Nights CRPS Support and the group gave me inspiration – it made me realise that I really need to self-advocate. My pain specialist was very impressed that I had done all of this research and she was like: ‘Where are you getting this information?’ I became a little bit of an expert myself, which was nice because I felt like I knew what was going on with me, but I felt like it wasn’t real in a way until I joined the group,” says Maggie.

“I hope through all of the information I have gathered I can get somewhere myself – I mean Burning Nights has given me everything, I just need to work it out with my insurance,” she adds.

She has participated in Burning Nights CRPS webinars about sleep with anxiety and breathing techniques.

Burning Nights CRPS Support has also helped Maggie find a partner for one-on-one support. She made contact with a lady in the United States through Burning Nights CRPS and they keep in touch via text messages. “It’s nice to talk to somebody my age who understands how our lives pretty much got taken away from us and how to deal with that,” she says.