How a rare disease robbed me of my career, friendship and femininity: Danielle’s story

Danielle* used to have a life many women could relate to. She loved her job as a beauty therapist, enjoyed having a drink at the pub with friends and cut a glamourous figure in her three-inch high heels. Like most people, she had never heard of Complex Regional Pain Syndrome (CRPS), let alone had to face the debilitating chronic pain that comes with it herself. But her world changed beyond recognition in 2011 when a 4×4 ploughed into her car at 50 miles per hour, shattering her ankle and 10 ribs, smashing her cheekbone, sternum and collarbone and triggering nerve damage in her face and right hand. 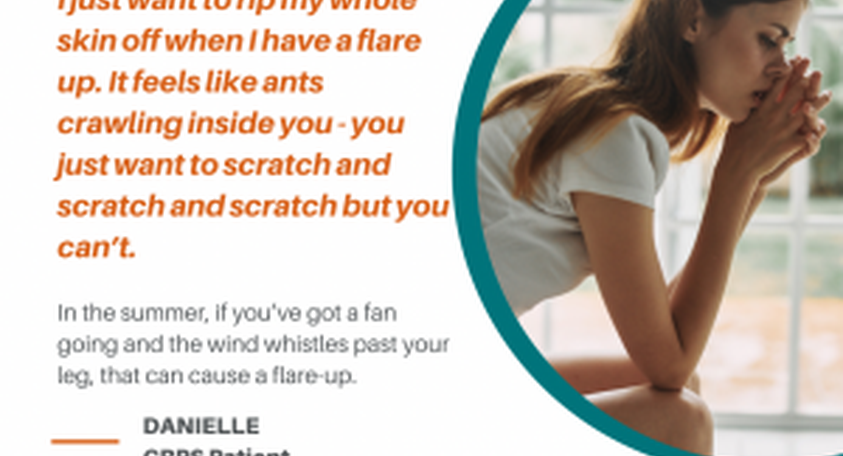 Danielle had to be cut out of the crumpled remains of her car and airlifted to hospital, where she was rushed into surgery. But the devastating crash and her four-week hospital stay marked only the beginning of an ongoing nightmare for the 35-year-old mother of one. Her initial euphoria at surviving the accident dissipated as months of physiotherapy, pain management and endless rounds of medication failed to alleviate the excruciating pain radiating through her body. In 2012 she was diagnosed with CRPS, a condition that amplifies and prolongs pain far beyond what could be expected from the initial injury. This would not be merely a grueling chapter in her life – it would become her permanent new reality. Ten years and countless treatments later, Danielle still suffers from constant physical pain.

The diagnosis scared Danielle. Other than a few terrifying reports on American patients, there was little information on the Internet about CRPS at the time. Desperate to find out more, Danielle asked a nurse at her daughter’s school what this strange-sounding condition was. Much to her dismay, the nurse had never even heard of CRPS. No wonder – Danielle belongs to a small cohort of around 15,000 people in the UK who are diagnosed with this rare disease every year. But she counts herself lucky to have been diagnosed at all. A lack of awareness and training – student medics only get six hours oftraining on persistent pain during their degree courses – means some sufferers are not diagnosed for years while others are misdiagnosed or remain undiagnosed. Sadly, even for those like Danielle who do get diagnosed, there is no cure.

Danielle has visited countless orthopedic consultants and pain specialists over the years. She underwent further corrective surgery on her ankle in 2013 and 2014. She tried a plethora of prescription pills, some of which made her hair fall out and some of which left her so docile she felt she could not look after her young daughter. She received a nerve block to try to prevent pain signals reaching her brain. She gave hydrotherapy a go. She got a battery implanted in her stomach that sends electrical impulses to her ankle to disturb the nerve pathway when she activates an app on her mobile phone. She subjected herself to steroid injections. She even considered having her foot amputated but doctors could not guarantee that removing the limb would end her agony. Every time Danielle started a new treatment, she had high hopes of finally being healed. But nothing worked.

“I’ve never found anything to take the pain away. And I’ve tried everything. I’d wash my face in bird poo if they told me I wouldn’t have pain anymore,” says Danielle.

“And that’s what makes CRPS so spiteful – in order to proceed you need to give up hope of finding a cure because it’s an endless task and there is no cure.”

The thin, grey skin on Danielle’s ankle is hypersensitive. It often swells up like a balloon, turns blue and sends acute pain up the entire length of her leg, leaving her unable to get out of bed. Getting comfortable, even in bed, is impossible – she can’t let even the softest of bedsheets touch her ankle. The tinnitus in her ears worsens, leaving her unable to think properly, and her eyes hurt so much that she can’t wear her glasses. Night sweats and worries about the future plague Danielle’s sleep, leaving her exhausted, cranky and in a foggy haze the next day. The physical throbbing is accompanied bymental torment: depression sets in and she can’t focus on anything but the pain.

“I just want to rip my whole skin off when I have a flare-up,” she says. “It feels like ants crawling inside you – you just want to scratch and scratch and scratch but you can’t. In the summer, if you’ve got a fan going and the wind whistles past your leg, that can cause a flare-up. So can having the shower on in the bathroom when you’re trying to wash – it can make you swollen and you just get so sore and tender and then you can’t put pressure on the limb.” 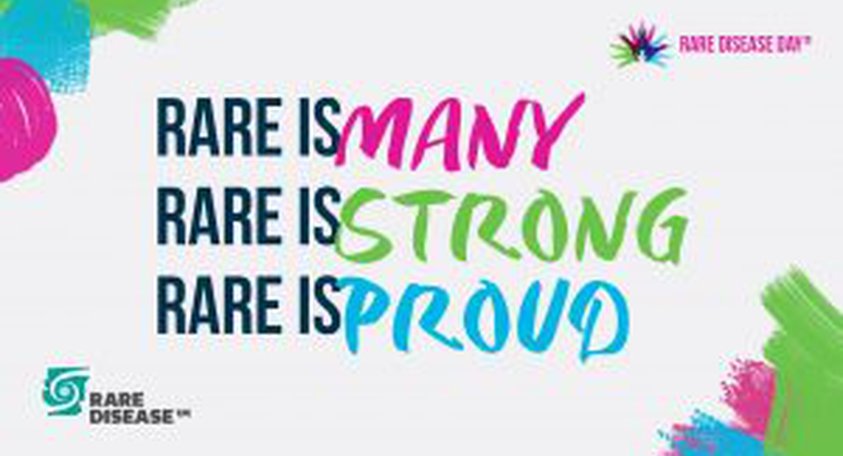 Atrophy – where part of the body wastes away – has taken hold in her right leg. Itis now 8 centimetres thinner than her left leg and 10 centimetres shorter. Her toes are clawing under. The doctors say Danielle’s ankle needs replacing but they aren’t willing to operate because they don’t want to make her CRPS any worse.

Danielle’s life is unpredictable – she can’t plan anything because she never knows how she is going to feel. One day she can walk around her garden and feels on top of the world but the next day, she’ll find herself bedbound. She now has a stick for the days when she is able to walk and a wheelchair for the days when she can’t. She takes 18 tablets a day and keeps a liquid opioid handy for when the pain becomes unbearable. The stress and strain of being in constant pain has cost Danielle friendships, her career in cosmetics and her independence.

“Sometimes you are so snappy and your brain is so foggy that you just can’t deal with communicating with other people – you struggle to find the right words to express how you feel. It just puts an enormous strain on your relationship with everybody,” she says.

“Not being able to manage your daily needs and being reliant on friends and carers is so distressing – it’s a lonely, lonely path to walk.”

She sometimes feels like a burden to her daughter too. Danielle could manage sedentary activities like arts and crafts with her daughter when she was little but she couldn’t chase her around the garden. She has often had to get a nanny to step in, robbing both Danielle and her daughter of irreplaceable memories.

Danielle struggles with self-care – even washing her face or brushing her teeth is a big achievement when she’s in the middle of a flare-up. She has had to let her hair grow out and turn white. Sometimes she can wear skinny jeans for half a day but then her leg starts to feel constricted and she has toswap them for pajama trousers. There are days when she can wear shoes but there are plenty of other days when she can’t get anything on her right foot.

“All those things have knock-on effects on your confidence,” she says. “I feel like CRPS took my femininity away from me- it really changed who I am internally. And I can’t do the things that I used to do so you lose friendships. In the early days I went for drinks at pub and then somebody took the mickey out of me and said I’d had too much to drink because of the way I was walking but I hadn’t – I wasn’t drinking because I was on a lot of medication but you hear those things and they loop in your brain.”

“CRPS just chips away at you.”

Living with a debilitating rare disease often left Danielle feeling isolated – until she found out about Burning Nights CRPS Support in 2017. Danielle has now found a new set of friends who also suffer from CRPS and the support group meetings she joins on Zoom are the highlight of her month.

“It’s been a real godsend for people just to understand – you don’t need to explain your condition to them because everybody gets it and it’s brilliant to share what works for you and what works for other people. It’s also interesting to hear the way other people deal with it in different countries as well,” she says.

There is at least one silver lining: Danielle says that living with CRPS has made her kinder and more compassionate. And now she has a mission too: having battled a poorly understood condition for many years alone, she’s determined that others should not have to tread that solitary path. So she has just signed up to volunteer with Burning Nights CRPS Support as a befriender for other people suffering from CRPS.

“I know how lonely and isolating it is, and sometimes you don’t want somebody to come and fix your problems – you just need someone to listen to you and understand because some things are unfixable,” she says.

300 million people around the world suffer from a rare disease. CRPS is one of them and Burning Nights CRPS Support is proud to support Rare Disease Day on Sunday 28th February 2021. This annual event shines a much-needed light on more than 6,000 little-known conditions and their cruel impact on sufferers as well as their families and carers. Head over to www.rarediseaseday.org to find out more or to take part in one of more than 500 events happening around the world. 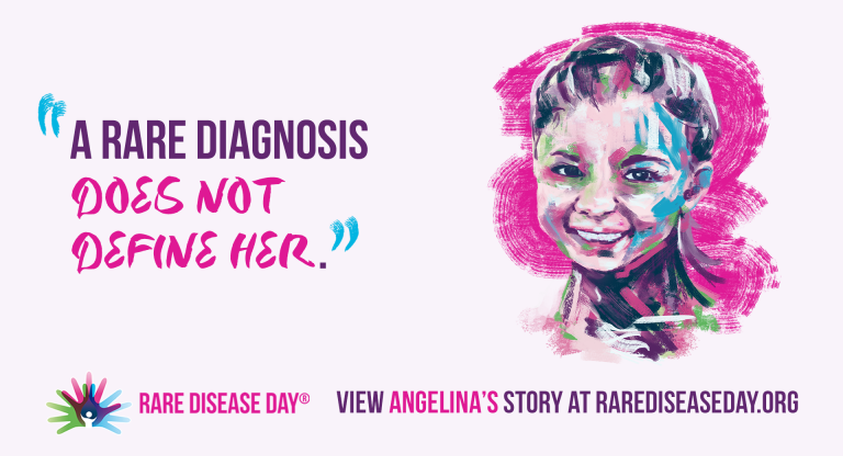