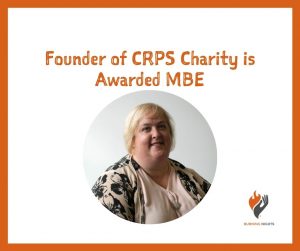 Victoria has battled with Complex Regional Pain Syndrome (CRPS) since she had an accident at work in November 2003. In the years that followed she developed ulceration and irreversible skin breakdown leading to her requiring an above knee amputation in 2006. Sadly, Victoria continued her struggle with CRPS and after a secondary injury some years later the condition was diagnosed in her other leg; she was then faced with a life altering realisation of having her second leg amputated above the knee.

It was at this point that Victoria decided she wanted to bring more awareness to this debilitating condition. She said “It was important to me that no-one else has to face living with CRPS alone without support, help and information and this is what drives me every day I am able to. So I can advocate for patients and families who cannot advocate for themselves.”

Victoria began Burning Nights CRPS Support as an information website and social media, but never realised how much the information was needed. In a matter of months she had embarked on the journey of becoming a registered charity. After achieving charity registration in April 2016, Victoria has worked tirelessly to grow Burning Nights CRPS Support into a successful organisation supporting not just CRPS patients, but also their families and caregivers.

The charity now provides a number of support services for thousands of people affected by CRPS every year and grows from strength to strength. Victoria said “It is so important for us as a charity to support not just those who have been diagnosed with CRPS but also their families and friends, because this condition has a major effect on everyone.”

“It is so important for us as a charity to support not just those who have been diagnosed with CRPS but also their families and friends, because this condition has a major effect on everyone.”

In February 2020 Victoria was also recognised by the Prime Minister’s office and received the Points of Light award for her charitable efforts with Burning Nights CRPS Support.

When learning of her MBE, Victoria was astounded and amazed that her hard work was recognised by others. She said “I am extremely delighted and humbled to those people who nominated and supported the nomination, which isn’t just for me but for all the patients and families our charity represents. I want to finally bring CRPS out of the darkness and into the light.”