If you’re battling a rare disease like Complex Regional Pain Syndrome (CRPS), chances are you don’t know anyone else who has even heard of it – let alone anyone who suffers from this kind of chronic pain themselves. That can leave you feeling as if you’re the only person in the world unfortunate enough to have been struck with this debilitating illness. 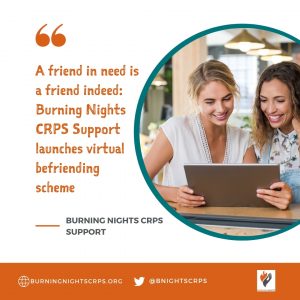 But it doesn’t need to be that way – there are thousands of people suffering from CRPS in the UK and countless others who are supporting a relative or friend with CRPS. We want to connect you with each other so you can talk about the challenges you face and how you tackle them. And that’s where our new virtual befriending service comes in – we’re now offering to pair you up with another CRPS patient or sufferer for a weekly Zoom call or phone chat.  We hope that sharing your experiences with someone in a similar situation will make you feel a little less alone. While discussing your problems won’t necessarily solve them, it might make them easier to deal with.

Danielle* knows how lonesome living with CRPS can be. She was diagnosed in 2012 after a horrific car accident and struggled with this cruel condition on her own for several years before stumbling across Burning Nights in 2017. Now she’s volunteering her time to talk to other people with CRPS via our befriending scheme. She sees it as her way of giving back after benefitting from being connected to kindred spirits through our support groups.

“I know how lonely and isolating it is, and sometimes you don’t want somebody to come and fix your problems – you just need someone to listen to you and understand because some things are unfixable,” she says.

If you’re 18 or older, live in the UK and are suffering from CRPS or if you have a family member or friend facing this rare disease and you want to talk to someone who’ll understand, fill out the form here and one of our team will be in touch.

We’re also looking for more volunteers like Danielle to help out as befrienders – if you’re interested and have an hour or two to spare every week, please complete the volunteer’s interest form and one of our team will be in touch.