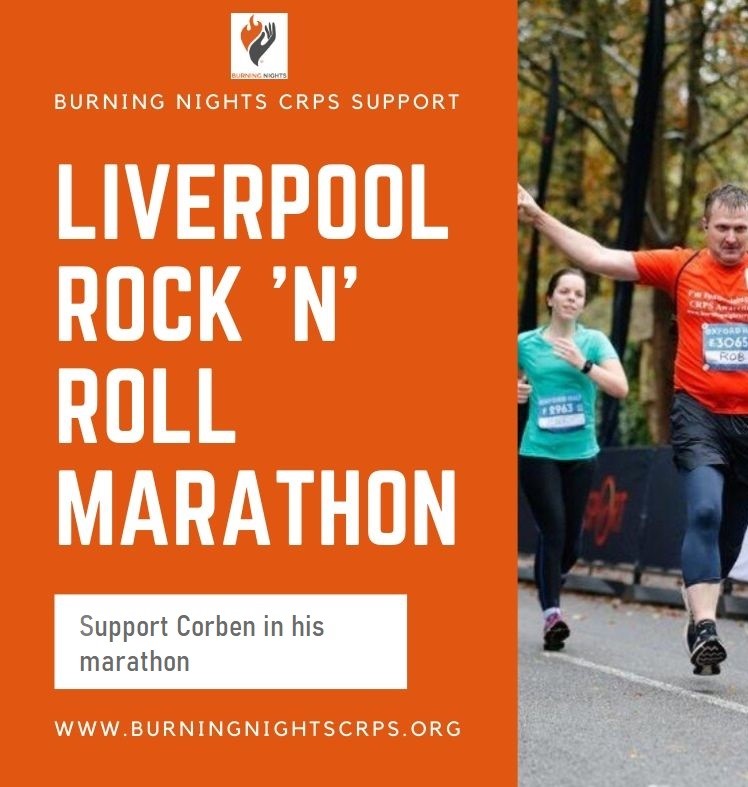 Corben Roberts, a 30-year-old Transport Planner based in Telford has made the decision to raise money for the UK’s best known CRPS charity. He intends to run the full Liverpool marathon (all 26 miles!). His wife Amy, 29, has been living with CRPS since 2019 and is the primary reason for his fundraising efforts for the charity.

The ‘Rock n Roll’ Liverpool Marathon will take place on October 23rd and 24th 2021 and is an opportunity for many people to fundraise on behalf of their chosen charities.

This will be Corben’s first full marathon, but will be a special moment for him, as he ran his first half-marathon in Liverpool in 2016.

Preparing for the marathon

One way he has been preparing is by doing ‘Red January,’ which challenges participants to do one form of exercise every day beginning in January and lasting throughout the year. Corben has managed to keep going every day since the start of the year and had completed an incredible 159 consecutive days so far when we spoke.

Like so many events last year, the marathon was cancelled in May 2020 due to the pandemic, even though Corben had been training hard and was on track with his training plan with that date in mind.

When it was rescheduled to October and subsequently cancelled, he said he felt like it was the right time to fundraise for Burning Nights.

Nonetheless, he hasn’t let that deter him and is looking forward to the rescheduled race. 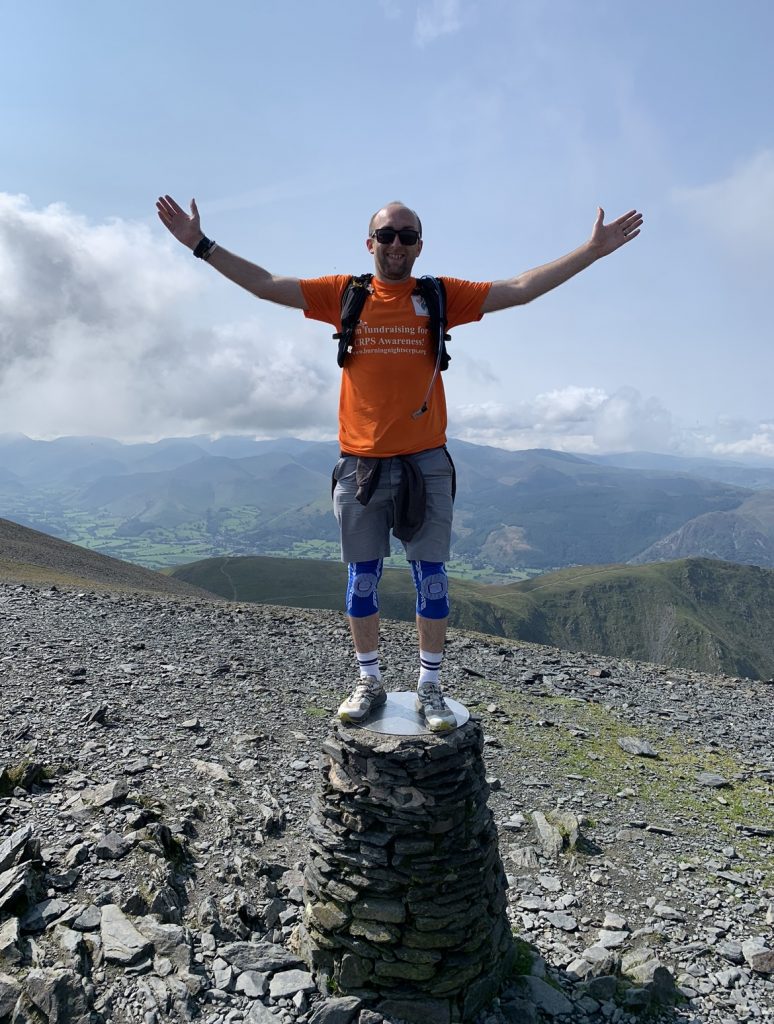 His reason for fundraising

Corben met Amy in 2010 and they married in 2019. Before Amy’s diagnosis, they were an active and adventurous couple, who loved hiking and travelling, and Corben says that hasn’t changed completely: “Now we have to plan a bit more… but we still do a lot.”

Similarly, Amy says that, “As a couple, we’re quite determined not to let it get the better of us.”

Due to a rare disease called Synovial Chondromatosis, Amy underwent a total hip replacement. She was recovering well for approximately six months when it became evident that she had Complex Regional Pain Syndrome. Although she hasn’t had an ‘official’ diagnosis, she has been told by several doctors that it is highly likely to be CRPS.

Corben spoke about how the lack of general awareness by the medical profession added to the difficulties the couple faced on a daily basis.

Despite the numerous adjustments they’ve had to make to their life, Amy said that it came as a wonderful surprise to learn that Corben had decided to do a marathon to raise much-needed funds for Burning Nights CRPS.

Both have found Burning Nights CRPS to be a fantastic resource. Amy has attended a virtual support group, and Corben follows the motivational social media posts put out by the group.

When his work schedule allows, Corben intends to join Burning Nights’ carer’s support network. They both joined the annual conference in November 2020 and both found it a great experience.

Amy says that “Reading other people’s stories is a bit of an insight into how it is for other people living with it and how different it can be.”

According to Corben, part of the motivation for doing the run comes from past experiences of having run half-marathons. His first one was in 2016, to raise money for a charity for orphaned children in Thailand that Amy was volunteering with. During this run, he managed to raise several hundred pounds.

He says that it was part of their goal as a couple this year to raise awareness about the condition that affects approximately 1 in 3,800 people around the UK. 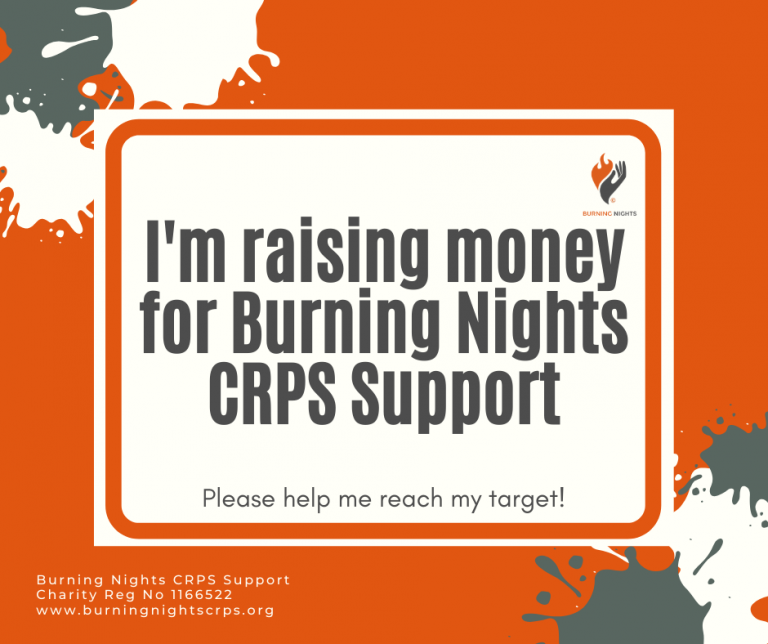 Remarkably, Corben successfully raised his target of £500 within a month of announcing that he was doing the charity run, and as a result has increased his target to £750. He’s currently on £1,100, having raised 146% of his initial target.

Another way he has been keeping the awareness up is by posting a picture of his running activities every week on his social media platforms to show his progress so far, and included a link to his fundraising page.

To people considering fundraising for the group, Corben says, “I don’t think it matters how much you raise. I feel more committed, and that I need to share our story and tell people what is happening. For me and Amy, the awareness is really important. 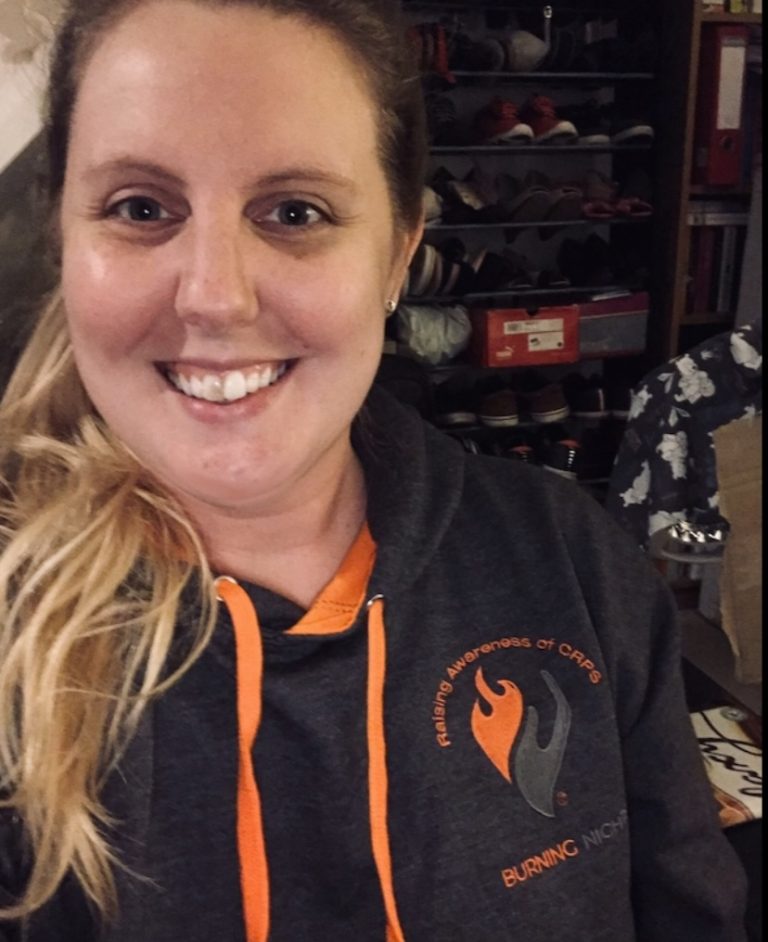 “If someone has cancer or Alzheimer’s, everyone knows those things and a doctor can easily diagnose those, but with CRPS, you have to actually explain it to some medical people.”

They have also received support from Burning Nights CRPS Support on the best ways to fundraise, with tips on techniques that work to raise the maximum amount possible.

He said that completing the marathon was a life-long goal of his and in 2019 when he ran the Great North Run, his t-shirt stated “I run because Amy can’t.”

“Now I intend to run even further because Amy can do even less.”

To contribute to Corben’s fundraising, click on his Just Giving link. A donation of any amount will be gratefully received and will go directly to helping others living with CRPS.

Ways You Can Get Involved

Support for our work is crucial. Without your support we couldn’t offer the key services such as our counselling and befriending services.

There are many ways you can get involved such as: